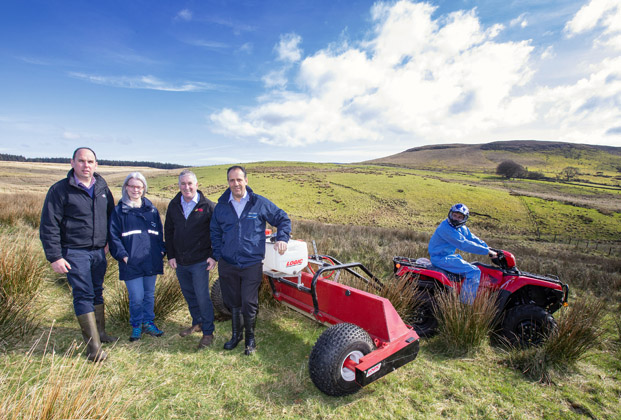 NI Water’s weed-wiping initiative, in conjunction with the Water Catchment Partnership, is being introduced in the Ballymoney area between April and October 2019 & 2020. The free weed-wiping project is aimed at land managers tackling rush weeds in the catchment area of Eden Burn near Ballymoney. Other partners include: UFU, NIEA, DAERA, CAFRE and the Voluntary Initiative.

Roy Taylor NI Water Catchment Manager says, “We are rolling out this new project at Eden Burn, near Ballymoney, Co Antrim following on from the success from our weed-wiping pilot at Seagahan, County Armagh. The Seagahan pilot project reduced MCPA levels in the dam by over 75 percent in 2018, making it much easier and more cost effective for NI Water to supply high quality drinking water to the local area. This latest project represents an investment of £20,000, taking the overall investment to more than 60k. Previous weed-wiping projects have clearly illustrated that trust and working together in partnership delivers for all and we are confident this will continue with the farmers in the Ballymoney area.”

The launch of the Eden Burn weed-wiping trial took place earlier this week on the 28 March in Ballymoney Town Hall at 7.45pm. This was an open meeting for everyone in the area to attend.

The UFU encourages those who live and farm in the catchment to learn more about the benefits for all by participating and supporting this initiative. UFU Deputy President Victor Chestnutt is local to the area and says, “The project has been very successful elsewhere in Northern Ireland and has helped to improve water quality. It is a testament to the farmers in the area who embraced this technology and to NI Water, NIEA, DAERA, CAFRE and the Voluntary Initiative for using a collaborative approach rather than regulations and penalties. It is a great example of what can be achieved when we work together constructively.”

For anyone who missed the official launch of the project at Ballymoney Town Hall on Thursday 28 March, they can get further information by emailing weedwiping@niwater.com or by contacting our Catchment Liaison Officer Rebecca Allen: 07772225226.

To date, NI Water’s total investment into Weed Wiping projects is as follows:

The Water Catchment Partnership was established in 2013 to help address significant water quality issues in Northern Ireland. Their aim is to proactively work together to promote and raise awareness of best practice when using pesticides in the garden or on the farm, through a voluntary approach to improve water quality. Pesticides include herbicides, weed killers, fungicides and insecticides.

The Water Catchment partnership is a working partnership established from representatives from Northern Ireland Water, Ulster Farmers Union (UFU), Northern Ireland Environment Agency (NIEA), Department of Agriculture, Environment and Rural Affairs (DAERA), College of Agriculture, Food and Rural Enterprise (CAFRE) and the Voluntary Initiative. Their aim is to deliver one message incorporating the ethos from all organisations to effectively tackle the problem of pesticides in the water environment particularly in Drinking Water areas.

Rushes can be managed by using herbicides applied by either a boom sprayer, knapsack or a weed-wiper. Weed-wipers can manage rushes more efficiently than conventional boom sprayers using less chemical with a dramatic reduction in spray drift. Weed-wipers are only licensed for use with glyphosate, a chemical which has potentially less impact on water quality as it can break down quicker at around 3-7 days compared to MCPA, which breaks down in 15-25 days.

Greenmount CAFRE have held demonstrations where plots of rushes were controlled using a number of different methods:

This demonstrated that the area cut and later weed-wiped with glyphosate showed the most effective rush control with minimal water pollution. This method uses glyphosate, which is approved for use in a weed-wiper. The average percentage of rush reduced from 81 per cent in 2014 to 20 per cent in 2015.

Based on these findings the project trialed this method of rush control in the Seagahan Catchment area in 2017 and 2018. Results from the Seagahan project showed that it was a great success, reducing MCPA levels in the dam by over 50% in 2017 and 75% in 2018 and therefore making it much easier and more cost effective for NI Water to supply high quality drinking water to the local area.