Refill, Reuse and Join the Refillution! 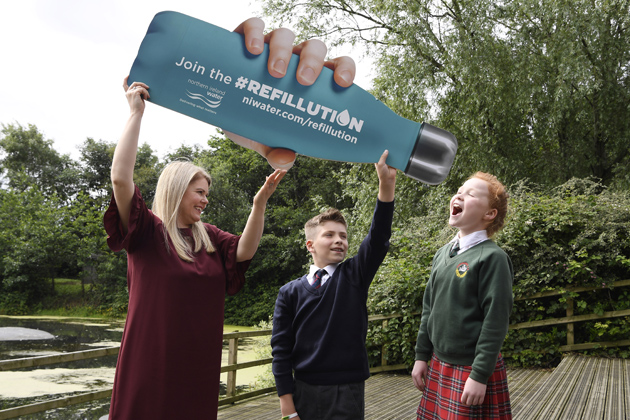 Northern Ireland Water would like to invite you to ‘Join the Refillution,’ as we launch our campaign encouraging everyone to refill a reusable water bottle with tap water and buy fewer, single use plastic bottles.

As part of a national day of action across the UK on Wednesday 19th June, everyone is being asked to support the campaign and in so doing, help reduce the global problem of marine pollution.

To support us in our launch we asked Primary 5, 6 and 7 children in all our primary schools to design a poster, encouraging people to refill their reusable bottles with tap water.

Presenting the prizes at NI Water’s Heritage Centre, Belfast, CEO Sara Venning says choosing the winners was a difficult decision, “The NI Water Schools Competition Award ceremony is an event I look forward to every year. The standard of the entries we receive and the sheer imagination, thought and effort that goes into every picture is truly amazing.  These are our next generation of water users so it gives us a wonderful insight into how they view the world of water. ‘Refill Reuse’ was this year’s theme, to coincide with the launch of our ‘Refillution’ campaign, highlighting the importance of refilling a reusable bottle. We had 900 entries from 33 schools so our judges had a difficult task!”

Figures from a Marine Litter report (2018), conducted by Keep Northern Ireland Beautiful have revealed that 78% of litter collected on Northern Ireland’s beaches was plastic. Plastic is one of the few materials which never degrades completely in the natural environment; instead it breaks down into smaller pieces over a very long period of time.

Angela Halpenny, Northern Ireland Water Head of Environmental Regulation says, “The water industry has a strong focus on the environment and we are committed to tackling the problems caused by plastic bottles which block up our rivers and drains, and pollute our seas. By switching to a reusable bottle, people can help turn the tide in helping to reduce plastic waste. Our drinking water is world class and we want everyone to benefit from it.”

Northern Ireland uses 145 million single use plastic bottles every year. Across the UK, 7.7 billion plastic water bottles are used each year, with the average person now using 150 plastic water bottles every year – that’s more than 3 a week. Many are discarded, and end up polluting our rivers and seas. Staggeringly if just 1 in 10 refilled just once a week, we would save around 340 million plastic bottles a year.

NI Water, Refill and Water UK are urging the public to get involved with Refill Day on 19th June by carrying their reusable bottle, refilling on the go and sharing their involvement on social media using the hashtags #Jointherefillution #Refillution #RefillFreeCleantheSea

With our drinking water world class, staying hydrated and reducing plastic waste is a win-win for everyone.

For more information about the campaign visit https://www.niwater.com/refillution/

The awards ceremony took place at the NI Water Wastewater Heritage Centre in Belfast on Wednesday 19th June. Winners received monetary donations for their school along with a certificate and water goody bag.