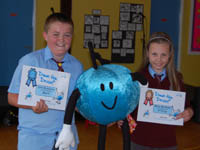 The competition, themed around NI Water’s Bag It & Bin It campaign, called on local children to design a poster showing why the three P’s only (Poo, Pee and Paper) should go down the loo and everything else should be put in the bin.

“Many people genuinely don’t realise the damage they are doing, not only to their own internal pipes, but also to the sewerage system they share with their neighbours. It is only when faced with blocked drains and out of sewer flooding that they realise those ‘harmless wipes’ are in fact creating chaos!

“The cost of the damage caused to our sewerage system by inappropriate flushing and dumping in drains is also a major factor. NI Water spends in the region of £1.7 million per year clearing blocked drains. This is one of the reasons we decided to theme this years competition around the ‘Bag It & Bin It’ message.”

The competition was open to all primary school children including special needs and Irish medium schools. The first prize was a £250 cash donation for each winning school and an individual prize for the winning child in each age group.