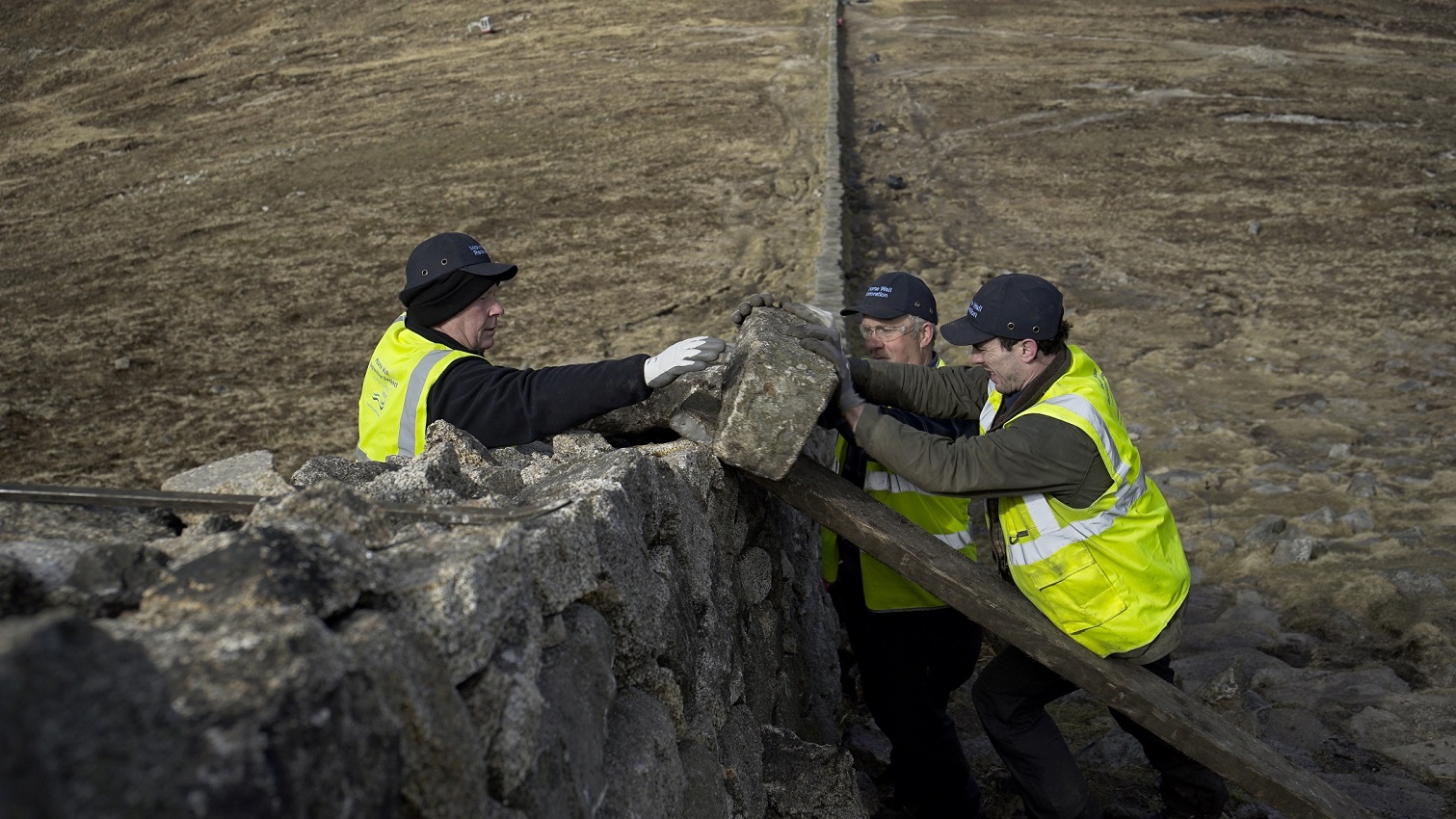 NI Water is delighted to announce a further £2.5m investment to carry out repairs on the iconic Mourne Wall, which this year celebrates 100 years since its completion in 1922.

Phase two of the Mourne Wall Restoration Project will get underway this month and will build on the previous programme of restoration - completed at the end of 2018 - which saw over 600 repairs undertaken along the 22mile-long granite structure.

Hand built by the Belfast Water Commissioners between 1904 and 1922 to mark and protect the 9,000-acre water catchment which feeds the Silent Valley and Ben Crom Reservoirs, the wall has been a listed building since 1996 and today is in the ownership of NI Water.

Speaking about the restoration project Michael Donnelly, NI Water Senior Project Manager said: “As part of NI Water’s commitment to the ‘Protocol for the Care of the Government Historic Estates’, we undertook surveys along the entire stretch of wall during 2016 and set in place funding for a programme of repairs to get underway in 2017.

“That first phase of funding saw over 600 wall repairs completed in less than two years which was a fantastic achievement. However, we were always aware that the wall may suffer further deterioration in the future and as a result, NI Water set in place funding to undertake subsequent surveys and repairs during its PC21 Business Planning period (2021-2026).

“As this famous structure marks its 100th birthday, NI Water is delighted to announce that a further £2.5m will be invested to protect the integrity of this much-loved listed building and help safeguard its stature for many years to come.”

Infrastructure Minister, John O’Dowd praised the valuable work of the Mourne Wall Restoration Project and said: “I commend NI water and its partners in preserving this iconic landmark as it approaches its centenary and the work undertaken now will mean that not only will the Mourne Wall be enjoyed by many future generations but it will also serve to protect this crucial water catchment area which feeds Silent Valley and Ben Crom Reservoirs”.

Welcoming the support from local stakeholders, Mr Donnelly continued: “As we embark on this next phase of the Mourne Wall Restoration Project, I would like to thank Mourne Heritage Trust, NIEA, National Trust and the Trustees of Mourne for their ongoing guidance and assistance and acknowledge the strenuous efforts that will once again be exerted by the contractors and wider project team in carrying out this work.

“Over the next few years, we look forward to completing as many repairs as possible and carrying out a proactive ‘stitch-in-time’ approach which will see the careful dismantling and rebuilding of vulnerable bulges in the wall to aid its longevity. With the Mournes attracting thousands of visitors each month, we appeal to the public to be mindful of this ongoing work and the possibility of helicopters being in the area. The helicopter lifts will be carefully managed with stewards and signage will be in place for health and safety purposes.”

The iconic granite Mourne Wall is a recognised navigation route - often referred to as “the handrail”. This latest funding means that a total of over £4m has been invested to date to protect the wall and ensure that it continues to be a sturdy handrail for many years to come.

Belfast-based RPS and the local Mourne Heritage Trust are once again providing technical and project management support to NI Water for this next phase of repairs.

Don’t miss out on the chance to celebrate 100 years of the wall at our fantastic Party in the Park at Silent Valley Reservoir on Sunday 14 August from 1-5pm. Find out more at https://www.niwater.com/silent-valley

In a perfect marriage of traditional and modern working practices, once split, the capping stones were bagged and transported by helicopter to the required locations. With the helicopter averaging 100 lifts per day, and with no negative impact to paths throughout the mountains, this was found to be the most environmentally favourable method of transport and will be used again in phase two.

In addition to the phase one repairs, an extensive length of path works was undertaken in conjunction with Mourne Heritage Trust (MHT) to future-proof the restoration work and protect the integrity of the wall.

The Mourne Wall Restoration Project has been the recipient of many awards including RICS Project of the Year. The stonemasons also won a coveted Heritage Angels Award.

The Mourne Wall Restoration Project has caught the attention of the wider public with the project featuring in the recent BBC ‘Chronicles of Mourne’ series.