Beat the Freeze this Winter 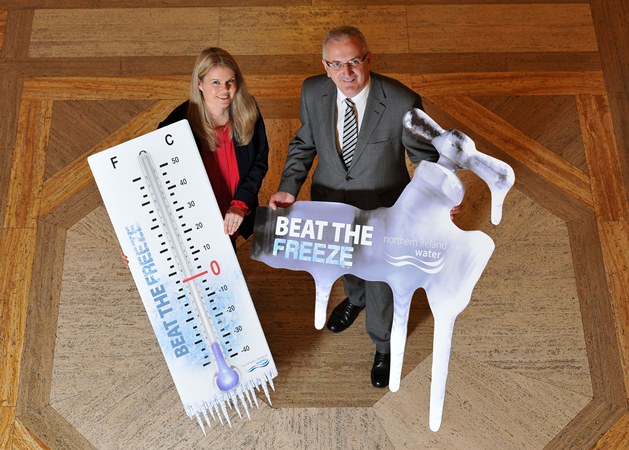 Following on from the successful, ‘Two Step Pipe Check’ campaign of 2012, the new message reinforces the call to check that homes and businesses are prepared for the cold weather conditions.

Danny Kennedy said: “The cold snap in March of this year, following a relatively mild winter, clearly demonstrates the unpredictability of our weather. It also acts as a reminder of the need for all of us to prepare our homes and properties, now, before winter returns.

“By taking a few simple steps, we can all play our part and help ‘Beat the Freeze’.

The advertising campaign will be rolled out through various media outlets including TV, radio, print and billboards.  An information leaflet will also be distributed to households in Northern Ireland.

The Minister continued: “Preparation is once again at the very core of NI Water's advisory campaign.

“’Beat the Freeze’ is a quick and cost effective approach to help combat the cold weather. Simply, take a few minutes to ensure that water pipes are protected and well insulated, if not, then take action now and potentially save money, time and the inconvenience of dealing with a burst pipe.”

“There are simple procedures the general public can carry out in order to ‘Beat the Freeze’.  These include knowing where your stop valve is and keeping the contact number of a registered plumber on hand to deal with any bursts on your property.

“The devastation caused by burst pipes cannot be underestimated.  Not only can the water cause structural damage to a property, but the lasting damage in a home can be to personal items, including photographs and electrical equipment such as tablets, iPads and laptops, that may not be replaceable.

“On a wider scale, if you imagine the impact of thousands of litres of water pouring out of burst water pipes; any water distribution network would struggle to maintain continuity of supply in those circumstances.  Insulating your pipework is an essential action to protect your water supply and that of your neighbours.”

The launch was supported by representatives from a number of organisations, including the Utility Regulator, CCNI, UFU, Federation of Small Businesses, NIIRTA, CBI among others.