Have you Spotted the Giant Loo Roll? 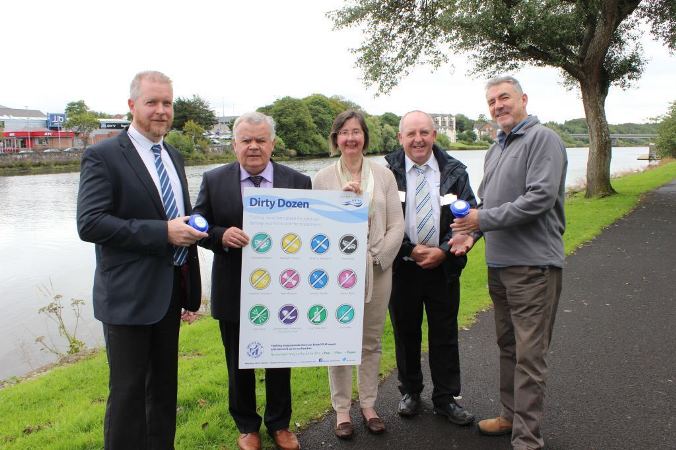 A giant loo roll is the focus of a major campaign being run by NI Water in the Coleraine area to raise awareness of its Bag it and Bin It message.
The campaign is designed to educate the public on the dangers of flushing inappropriate items down the toilet. NI Water is asking customers to spread this message and keep the sewers in the area clean and blockage free.
Our sewerage system is only designed to cope with human waste and small volumes of toilet roll.  Other items such as baby wipes, cotton buds and sanitary items which people flush down the toilet, do not break up and clump together to form a ball of rags.
Gavin McCready, Wastewater Networks Manager, “Many people genuinely do not realise the damage they are doing, not only to their own internal pipes, but also to the sewerage system they share with their neighbours.  It is only when faced with blocked drains and out of sewer flooding that they realise those ‘harmless wipes’ are in fact creating chaos!  The message is simple, only flush the three P’s – pee, poo and paper, everything else goes in the bin.”
Jim Allen, Environment Officer, Causeway Coast and Glens Borough Council, commented: “We fully support the efforts of NI Water to raise awareness about both unnecessary and unpleasant problems.  We appeal to all of our citizens within the Borough to avoid the temptation to treat their toilet as a bin.  Council has a long record of campaigning against sewage related debris which can find its way on to our coastline and spoil the enjoyment of a beach visit.
“We have experience of blocked storm drains overflowing during episodes of exceptionally heavy rainfall causing unpleasant spillage of mixed human and household waste at Christie Park in Coleraine as a direct result of public and commercial misuse of the sewage and wastewater systems.”
The campaign involves a co-ordinated effort with NI Water’s education team visiting local primary and secondary schools and a stand available at Sainsbury’s Riverside store on Friday 2 October and Saturday 3 October.  Staff will be available to give advice, flyers and promotional items to members of the public.
Mr McCready further added:

“The cost of the damage caused to the sewerage system by inappropriate flushing and dumping in drains is also a major factor.  NI Water spends in the region of £2.5 million per year clearing blocked drains, money which could be spent improving services to the local community.”

Why not view the damage done to sewers first hand at http://www.youtube.com/northernirelandwater#play/all/uploads-all/0/UCutKlVK3UY

Further information on NI Water’s ‘Bag it and Bin it’ campaign can be found at www.niwater.com