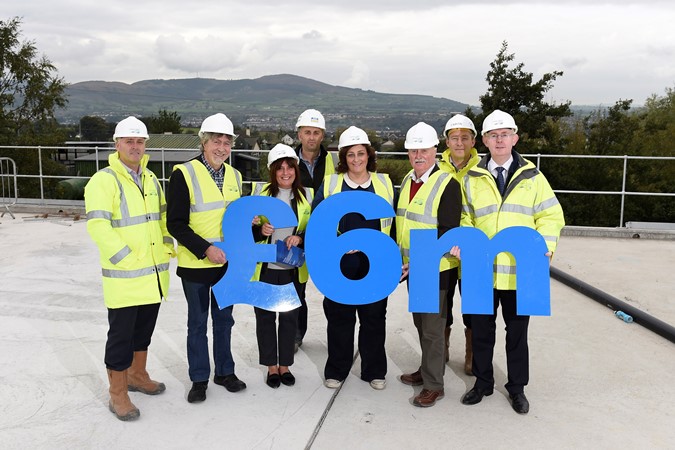 NI Water is pleased to announce that pipelaying on its Ballydougan to Newry Trunk Main Scheme is now complete, while significant progress is being made on its new Crieve Service Reservoir which forms the main part of the current £6m investment.

Just over 5km of new large diameter water main has been installed to link key pumping stations in the wider Newry area with the new reservoir at Crieve, which will quadruple the storage capacity of the original tank.

“The completion of the pipelaying element is a significant step forward in this important infrastructure project for the wider Newry area. The new pipeline and extended Crieve Service Reservoir – which will be brought fully into service in early 2016 - will improve the security of the water supply across Newry city and its surrounding areas.”

This latest £6m NI Water investment forms the third phase of the Ballydougan to Newry Trunk Main Scheme, which has already seen £14m invested in upgrading the water infrastructure serving the city.

Other work being undertaken by NI Water as part of the current package of improvements includes extensive refurbishments at Carnbane Pumping Station, which are almost complete and a new pumping station at Cullyhanna which has just recently got underway. Chlorination and control equipment at a number of other NI Water sites including Camlough Water Treatment Works, Newry West Service Reservoir, located off the Camlough Road and Camly Service Reservoir located south of Newtownhamilton, are also being updated.

Thanking the local community for their patience and support throughout this third phase of work, Martin added:

“Large construction projects of this size and nature have the potential to impact upon many. I am delighted that the new pipeline has been laid successfully and would like to thank the many landowners, residents, business owners and commuters whose support and co-operation helped NI Water and its contractors, BSG Civil Engineering, complete this important project element on time. We value the ongoing support of our key stakeholders and the wider community as we undertake critical connections and final reinstatement works, continuing towards completion of the project early next year.”